The Story of the Import & The Inactive Record

Ok, so i was transferring a bunch of records with lookup field linked to contacts and accounts from an old CRM 4 deployment to our new CRM 2011 deployment. I was trying to do this the quick and easy way……exporting records to excel.

A large number of the records imported ok but a large number failed due to a “duplicate lookup reference exists". Now, this normally means, especially in the case of a contact record that you have 2 “John Smith” records and the import does not know which one to resolve the newly imported record too. However, i searched and only 1 John Smith record came up?!……

So, then i remembered that we had recently ran a duplicate contact clean-up job on our contact records using the de-dupe process to find the duplicates and merging the records together. So i searched for John Smith but this time i searched for both Inactive and Active records and voila! 2 records! 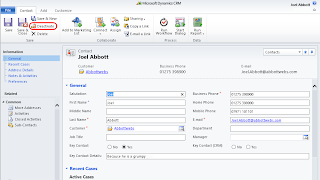 So, first point, by doing this i discovered that the when resolving lookup references, the import process includes deactivated records and as far as i can see there is no way to turn this feature off. So, after being mad at MS for a while, i eventually realised that actually this wasn't a bad idea, especially when migrating historical data. However, my issue was, how do i get around it?!

I realised that i needed to adjust the inactive contact records in such a way that they wouldn't be picked up by the import process which basically meant, changing the name on all the inactive records. But i also wanted to change it back again. So, i went for the following:
Some may see this as an ingenious approach whilst others long winded but it did the trick! Couple of points…
Hope this helps and if you have read to this point…..well done for sticking with it!

Having worked with Microsoft Dynamics CRM 4.0 in a sales & development environment, my focus now is on customising this awesome solution and showing its true potential.